You are here: Home » 10,000 survivors, mourners and supporters “Race for the Cure”

10,000 survivors, mourners and supporters “Race for the Cure” 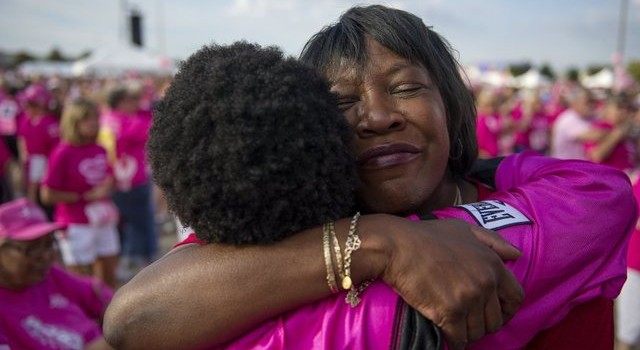 Carol Oglesby was 39 when she found out she had breast cancer.

A mother of two girls, Oglesby said the experience was scary, to say the least. But now, at 75, she’s been cancer-free for 36 years — Oglesby’s two girls now older than she was when she was diagnosed.

“The recovery wasn’t that bad, but it was the mental thing, getting through it,” she said, wearing a pink “survivor” shirt and gold medal.

Oglesby was one of the at least 800 known breast cancer survivors at the Komen Race for the Cure at Eastland Mall Sunday morning.

ith about 10,300 total registered participants, the support for people touched by breast cancer at the annual event is “overwhelming.”

“It’s a good feeling that you have somebody to share this terrible thing with,” she said.

The event is a flagship fundraiser for the local Komen group, which provides services and education to people facing breast cancer. The landmark feature of the event is the 5K race, however thousands participated in the smaller 1 mile run/walk.

According to Komen, 75 percent of Race for the Cure proceeds remain in the Evansville region for programs related to awareness, screening and treatment of breast cancer. The remaining 25 percent goes to the national Komen organization for research grants.

The national Komen group raised $116 million in 2013, $76 million of which was paid out to various organizations through grants and other programs.

Money raised locally, enables the Evansville affiliate to give about $500,000 in grants each year to Tri-State projects that directly provide breast cancer-related service, like helping uninsured and underinsured women to receive mammograms and treatment.

According to the Centers for Disease Control and Prevention, 220,000 women and 2,000 men were diagnosed with breast cancer in 2011, the most recent year accurate data is available.

Holding a pink carnation, Rebecca Springer, 60, and her 14-year-old daughter Michaela Springer came from New Have, Illinois to participate in the 1-mile walk.

Rebecca Springer is a six-year survivor. She’s “blessed” to have found the cancer when she did, she said.

“I almost didn’t go to get my mammogram that year. Something inside said, ‘You better go.’ Then they found it. … If I hadn’t gone, which I almost didn’t, it would’ve been way worse. It was really a blessing in disguise,” she said.

She said the first year was hard, with going through surgery and 36 radiation treatments, but now every year is another blessing marked by attending the annual race, she said.

While treatments and the ability to diagnose breast cancer have improved drastically in recent years, thousands still succumb to the disease annually.

Tom Murray on Sunday morning reflected on his late wife Elizabeth, whose name was written on a pink piece of paper taped on his back.

After three years of chemotherapy treatment, Elizabeth died in 2011 from breast cancer, like nearly 41,000 women and 443 men did that year.

They had been married 38 years, and the loss was hard, said Murray.

“I think everyone who loses someone has a trigger, there are certain things that trigger memories, so it’s hard to get over that,” he said.

He was joined by members of Good Shepherd Church, where his wife taught language arts.

“This is one of the things I do in her memory,” Murray said.

⇐ What is genetic testing for breast cancer and who should get it?
The Winners Are…….. ⇒
Go to Top